Find it in FRM: Short Routes and Connections

The FrankfurtRheinMain (FRM) region covers a large area and is diverse. Here you can find vibrant towns and idyllic villages, mountain and river landscapes, and the new alongside the old. Thanks to the excellent infrastructure, everything is within easy reach. 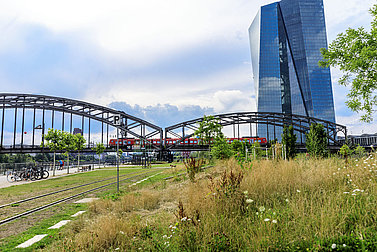 The public transport network (ÖPNV), which connects everywhere in the FrankfurtRheinMain region, is fast and reliable, and is therefore used regularly by the majority of the residents. Public transport is often more comfortable and faster than taking the car. Suburban trains (S-Bahn) and regional trains (Regionalbahn/RB) will take you to your destination, as well as buses and trams. In Frankfurt am Main there is also an excellent underground network (U-Bahn).

The Rhein-Main-Verkehrsverbund (RMV) is responsible for public transport in most of the FrankfurtRheinMain region. It is the largest transport association in Europe and serves the part of the region that is located in Hessen. The state of Rheinland-Pfalz is covered by the Verkehrsverbund Rhein-Neckar (VRN) and the Bavarian part of FRM is covered by the Verkehrsgemeinschaft am Bayerischen Untermain (VAB).

All of the local transport providers have a website as well as a smartphone app on which you can look up connections. If you are not sure which network covers the route you need, you can see all of the connections on the Deutsche Bahn.website.

If you would like to discover the numerous recreational and cultural opportunities in FrankfurtRheinMain, you can do so with the RheinMainCard. This card is valid for up to five people for two consecutive days and covers the entire RMV zone. You can use any means of public transport: suburban and underground trains, trams, regional trains and buses. The only exceptions are the Intercity (IC) and Intercity Express (ICE) trains. In addition, with the RheinMainCard there are numerous discounts to more than 40 recreational and cultural establishments in FRM. the A list of those participating is available on the FRM Tourism website.

Germans love their bicycles. Every other German uses their bicycle on a daily basis, to go shopping or to work, school or university. There is a lot to be said for cycling. It is healthy, environmentally friendly, there are no traffic jams and it saves you looking for a parking space.

Many towns and municipalities in the FrankfurtRheinMain region are well suited to cyclists. Many streets have paths reserved for cyclists, on which you can reach your destination quickly and safely.

Cycling offices such as the Frankfurt Cycling Office offer support to cyclists in FRM. On their websites you will find tips on cycle routes and safety.

Outside the towns, there are many interesting recreational routes in FRM:

If you would like to plan your own route, you can do so online with the Hessen Cycle Route Planner. The proposed routes which have been developed can be filtered using different criteria, such as gradient. Interesting sights or service stations are also marked on the routes. Of particular interest is the Student Cycle Route Planner which your children can use to plan their route to school.

Fast cycle paths are currently being planned for commuters. They should link the municipalities of the region with each other so that cyclists can get to work on good roads without any obstacles in the way. For cyclists travelling long distances every day, electric bicycles (e-bikes or pedelecs), which are becoming increasingly popular, are very convenient.

In many large towns and cities in the FrankfurtRheinMain region, you can spontaneously rent bicycles for a short period of time. Bike-sharing is now being offered in abundance. Bike stations for renting and returning bikes can be found all over the larger towns and cities.

Public transport also accommodates cyclists. You can almost always take your bicycle on trains for free and many have special sections for bicycles.

The FrankfurtRheinMain region is an international transport hub with an excellent network of roads. Thanks to the many large motorways (Autobahn), you can also reach your destination in FRM by car. However, there are a few things that drivers need to bear in mind.

During rush hour at the beginning and end of each working day, many commuters are on the road. This road congestion causes regular traffic jams. To avoid them, you might wish to use public transport or your bicycle.

The major cities of Frankfurt am Main, Offenbach am Main, Darmstadt, Mainz and Wiesbaden have green zones. You are only allowed to drive in these zones if your car has a green emission sticker indicating that it complies with certain emission standards. This is intended to reduce the amount of harmful fine particulates in the air. If you drive into a green zone without the correct sticker, you will be liable for a fine of EUR 80.

Foreign driving licences are valid for six months in Germany. After that you need to have your licence converted – unless it was issued in an EU country, Iceland, Liechtenstein or Norway, in which case you can use it in Germany.

Other foreign driving licences must be converted to a German licence. The tests that you have to take will depend on your country of origin. Germany has agreements with some countries, which makes the process easier.

You will have to register your car with the nearest vehicle registration office, which you will find in your town or district.

Carsharing is becoming increasingly popular in the FrankfurtRheinMain region and offers a cheap alternative to owning your own car. Nowadays, various providers offer carsharing services under varied terms and conditions. Carsharing stations can be found all over the larger towns and cities.

Long-distance buses have been operating in Germany for several years and offer a cheaper and comfortable alternative to rail travel. They usually take slightly longer than a car. Every major city in FrankfurtRheinMain has a bus station, a Busbahnhof or Zentraler Omnibus-Bahnhof (ZOB), from which long-distance buses depart for destinations in Germany and even Europe.

Carpooling is an option when travelling between cities. Here, drivers offer you a seat in their car in exchange for a contribution to the petrol. Many people offer carpooling on financial or ecological grounds, while others appreciate the company. The driver specifies a time and place of departure and the passenger generally pays in cash. To find carpooling online, just do a quick search for “Mitfahrzentrale” or “Mitfahrgelegenheit”.

German trains are operated by Deutsche Bahn. On the Deutsche Bahn website you can see train schedules for Germany and Europe, and you can also buy tickets online. All of the cities have railway stations connecting the main German and European cities by ICE or IC train. In particular, Frankfurt Hauptbahnhof, the main railway station, is a major hub for German rail transport.