Find it in FRM: International and Bilingual Schools

FrankfurtRheinMain (FRM) is international, as can be seen in the choice of schools available. There are over 20 international and bilingual schools in the region. These schools, which are mostly in the private sector, are geared towards foreign cultures or use foreign school systems. Classes are taught in different languages, and there is a comprehensive range of childcare options. In addition, some state schools offer binational diplomas. Here, some classes are taught in a different language. 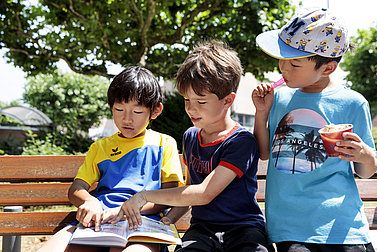 accadis ISB provides a bilingual learning environment in which all children can reach their social, emotional and academic potential. The school is a family-run business and offers bilingual education from the ages of 2 to 18 in an international environment north of Frankfurt/Main. Students take the junior leaving certificate (Cambridge IGCSE) and the International Baccalaureate Diploma (IB Diploma). Afterwards, graduates can study at accadis Hochschule next door.

Albert-Einstein-Schule (AES), „Gymnasium des Main-Taunus-Kreis", is the largest state grammar school in the Main-Taunus-Kreis. In addition to the Abitur, AES is one of the 68 certified schools in Germany which offers students the opportunity to take the French Baccalaureat.

ESRM was founded in 2012 as the first private European School. It is fully accredited by the EU and recognized by the state of Hessen. After 12 years of schooling, our students achieve the prestigious European Baccalaureate, which is completely equivalent to the national EU school-leaving diplomas and is widely recognized internationally. The school has two language sections: German and English, with an additional Spanish mother tongue section in the Upper Years. The level of the second language is extremely high, which is why our students study successfully in German universities and abroad. Since September 2021 ESRM opened its doors also to the International School RheinMain, which is an alternative branch to the school, affiliated with the IBO, currently offering the Middle Years Program, leading to the International Baccalaureate in the future.

At Fintosch, education in the nursery, the international Kindergarten and the international primary school (with reception class from 5 years of age) takes place under one roof. The joy of learning plays a central role at Fintosch. Under the motto “Fintosch feels like family,” children experience a child-friendly and caring environment in a multicultural community. At the Fintosch International Primary School, German and English are taught according to the German and international curriculum (IPC), involving cross-curricular, flexible and creative learning. Fintosch distinguishes itself as a healthy school, offering 6 lessons of physical education (PE) per week. The international primary school is open all year round until 7 pm and even offers holiday programs.

Frankfurt International School in Oberursel is a mainstream, independent school and was founded in 1961 on a parent initiative. Currently, it has over 1,800 students from more than 55 states. The English-language school primarily educates children of foreigners who are temporarily residing in the RheinMain area. In Oberursel all grades are catered for from Kindergarten to Grade 12, with the International Baccalaureate qualification on offer. There is a branch in Wiesbaden-Naurod, the FIS Wiesbaden, with instruction for children from three years up to grade 8.

The Herderschule would like to prepare students for a world that is constantly growing closer together, and therefore uses a concept that is built on different methods to systematically promote the international and foreign language competencies of our students. English is the first foreign language which is taken. Students choose Latin, French or Spanish as the second foreign language, and also have the option of learning Chinese as a third foreign language.

ISF was founded in 1995 and is part of the global SABIS® School Network and an IBO school. ISF students achieve excellent results and study at the best universities. In addition to English, ISF offers lessons in German, Japanese and Korean as mother tongue, and English, German, French and Spanish as a foreign language. The school offers all-day care as well as a variety of sports and other activities. Conveniently located, ISF has a theatre, an indoor swimming pool, tennis courts, an artificial grass pitch, music and art rooms.

As a European school, the Liebigschule creates open spaces in which students can learn and have a „foreign“ experience; open spaces in which linguistic diversity and knowledge of other cultures develop into intercultural competencies through social learning. Since 1995, the Liebigschule has been a member of the Hessian European Schools and works closely together with the Lycée Francais de Francfort.

MSF is the only IB World and International School in the city of Frankfurt that offers the IB Primary Years Program (Kindergraten - Grade 5), Cambridge IGCSE (Grade 6-10) and IB Diploma Programme (Grade 11-12). The school has over 550 students from 48 nations and offers an excellent education in English as well as numerous extracurricular activities.

Phorms School Frankfurt opened in 2007 as a bilingual, full-day school and expanded in 2010 with a second facility in Steinbach, available via daily chartered school bus. The City Campus Primary School in Nordend, very close to the Holzhausenpark, also offers a reception class for 5-year-olds. The Taunus campus in Steinbach has a kindergarten, primary school (including a reception class), as well as a secondary school.
Both, primary and secondary school are completely state-approved. The curriculum is based on Hessen state guidelines; however, it is complemented by the Cambridge International primary and secondary programs. Phorms boasts small class sizes and individual development, along with a varied afternoon and holiday program. Tuition fees vary according to family income.

The State International School Seeheim (SISS) is the international school branch of the Schuldorf Bergstraße. It has a primary and a secondary school.

We are a private all-day school with English as the language of instruction. We are the only IB World School in the region to offer all three IB programmes. Our main features are small classes and first-class opportunities for learning and support. Promoting the mother tongue is important to us, as well as the appropriate use of new media. We are a dynamic school rooted in traditional values such as compassion, respect, tolerance, integrity and discipline. We offer a wide range of after-school activities."

In Germany’s most culturally diverse region, SIS Swiss International School Frankfurt offers children a consistent bilingual education right from the start (50 percent instruction in German, 50 percent in English). We are not just talking about interculturalism, we also live it. Our teachers teach in their mother tongue, and therefore create an ideal setting for cultural and linguistic immersion as the basic principle of language and culture acquisition. In a safe and supportive enviroment, we encourage and promote your children’s intellectual and personal development, according to their strengths and interests.

Classes from 8:30 to 15:00, before and after-school care optional from 7:30 to 18:00 at the latest.
School leaving qualifications: Abitur and, on request, International Baccalaureate Diploma (IB)
Fees based on income