IF YOU’RE LOOKING FOR A HOME AWAY FROM HOME, YOU’LL FIND IT!

Once to Germany and back: Cintia Reyes from Bolivia studied in Leipzig in the 90s. 20 years later she came to work in FrankfurtRheinMain. In the interview she speaks about new beginnings, initial hurdles and really settling into our region.

You left Germany after your degree and went back to Bolivia. Over 20 years later and now you are back. How come?

“I studied psychology in Leipzig und then went back to Bolivia. I worked for various educational organisations. However, in all those years I never lost touch with Germany. I founded an association with others who had also lived in Germany. We gave support to other Bolivians who were returning and looking for a job. This is how I ended up working together with my current employer, the Zentrale Auslands- und Fachvermittlung (ZAV), International Placement Services. In the end, a position became vacant in Eschborn for which my expertise and knowledge about Latin America were required. I thought about it and decided to apply for the job. I thought, ‚Why not?’ My son is already grown up and has almost finished his degree in Bolivia. I had kept coming back to visit Germany, but I was very excited about being able to live and work here again.”

How was the rest of the application process and the journey to FrankfurtRheinMain?

“The first hurdle: a Skype interview with a time difference – at 6 o’clock in the morning my time! However, as it later transpired, that was only the beginning. I received an offer after a few weeks and was asked: ‚When can you come? We need you very quickly!’ So, I only had one month’s time to uproot myself in Bolivia and come to Germany. In the following weeks everything happened very quickly. I received a visa to enter Germany. Before that I had to take out sufficient insurance. Once here, I had 3 months’ time to get a residence permit. It is generally the case that Immigration Authorities are very busy in cities, especially during time periods when international students are getting registered. However, it’s also good to know, that people who have studied in Germany receive a residence permit more quickly.”

As a returnee, so to speak, did you then manage to settle in quickly?

„Even after having lived in Germany many years ago, it was a complete new beginning for me. Of course, Germany has completely changed since the 90s. In addition, back then I was living in East Germany, which also makes a difference. A lot of things were completely new to me. Finding a place to live, taxes, social security, bottle recycling machines – in my country all of that is completely different. Here there are simply more rules than there. And above all, people stick to them! It took me a while to understand how the whole system worked. To find your way around public transport, apps like ‚Öffi’ are indispensable.”

How was it looking for a flat?

„I have to admit, that really was not easy. I had hoped that it would be quicker. Fortunately, I was able to stay with a colleague to begin with. In Frankfurt, there is just too much competition on the housing market. In addition, there are numerous dubious offers that newcomers from abroad, in particular, should be aware of. And, landlords normally ask for permanent work contracts. I found my current flat on the internet. After viewing several flats, I realised that it was best to bring a sort of application folder with lots of information to the appointments. There were also 15 others interested in this flat, but I was lucky and got it. Now I’m looking for a bigger flat and am considering moving further out of Frankfurt. I like Schwalbach – it’s pretty and also quieter there.”

That sounds like a strenuous start. Can you now enjoy being in the region? What do you like best here?

„True, every new beginning is difficult, and that doesn’t just apply to people from abroad, but to everyone who starts again somewhere new. It was only after I had got to grips with the residence permit and finding somewhere to live, that I could really start taking in the region. I like FrankfurtRheinMain – it’s not as big as Berlin, everything is very close and within easy reach – it’s nice and cosy. Having said this, there are also a wide variety of cultural activities and things to do here in your free time. I‘m mostly drawn to the River Main where you can just sit and relax. Concerts and the Museumsuferfest (Museum Embankment Festival) also take place here.”

Are you in touch with other people from Bolivia and Latin America? Is there a home away from home in the region?

„I’m regularly in touch with people from Latin America through my job. There’s a large community in the region and many different clubs. Some of these organisations provide support for newcomers. In addition, I’ve recently started helping out in a Bolivian club called Puerta del Sol. Here there are people who have not lived for so long in Germany, as well as some who have lived here for a very long time, who either studied here, did vocational training or got married to Germans. There are also Germans who spent some time living in Bolivia. We organise many different events, for example, we took part in the Parade of Cultures. Bolivians came from all over Europe for it! There are also various bars and restaurants. I appreciate the variety that this region has to offer. Wherever you’re from, if you’re looking for a home away from home, you’ll find it!” 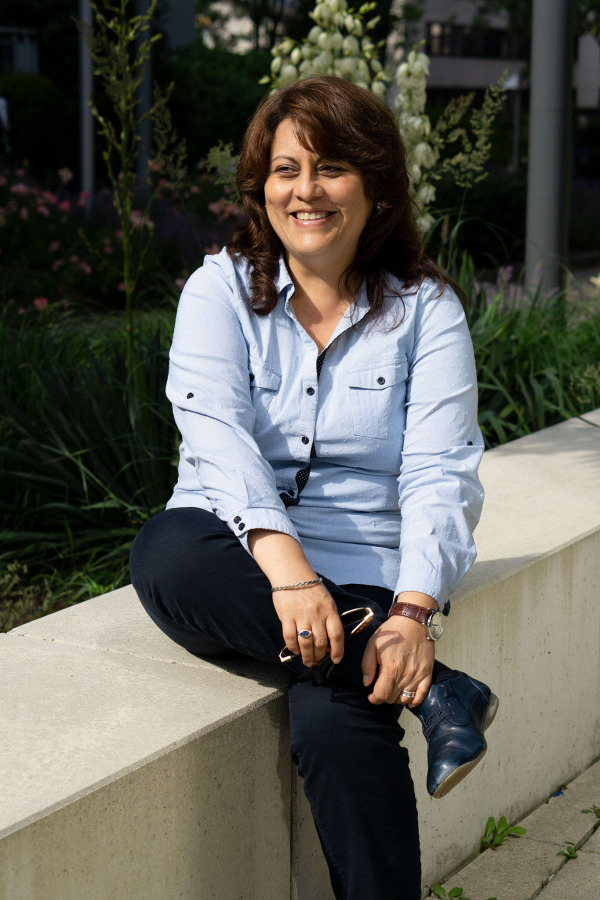